The Afghan cricket team broke Australia’s record by making the highest score in the T-Twenty20 cricket.
In the second Test match of India’s Rajiv Gandhi International Stadium played in India, Afghanistan defeated Ireland by scoring 0-2 in the series, but by the Afghan team, many records in its match Done.
Afghanistan scored 278 runs on the loss of 3 wickets in Ireland’s 20 overs against Ireland, which is still the highest score for the T-Twenty-one history before Australia scored 263 runs in a loss of 6 wickets in 2016.
Afghanistan’s oping batsman Hazratullah Zazai and Usman Ghani set 236 runs opening partnership, Usman Ghani scored 73 runs on 48 balls, including three six and seven wickets.
On the other hand, Hazratullah remained out for 162 runs on 62 balls, the score is the second major score in the short-term cricket, Australian captain Aaron Finch has made 172 runs while 16 runs in his innings. The 11-wicket included any player in the T-T20 Cricket record.
Hazratullah Zazai made a series of 42 balls, the third fastest Test in T T20, while in the match T-Twenty20 became the highest score in the match. In reply to the 278 runs of Ireland, Ireland also made 194 runs, making 472 runs in the entire match. 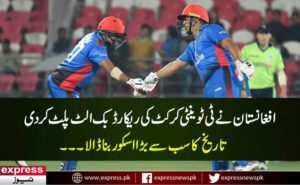