In the second T-Twenty20 target, Pakistan made 130 runs on one wicket

Pakistan’s batting continues in the second innings of South Africa’s 189 run goal and at the end of 10 overs, Green Caps have made 101 runs on one wicket.
Opener Babar Azam and Fakhrat Zaman gave the team a good start, while both the batsmen were batting and gave 41 runs off 41 for four overs. Fakhrzada Zaman made 9 balls in 14 balls when Babar Azam attacked While batting, he has scored a half-century score, scoring 72 runs and Hussein is moving forward with Anand.

In the second Test match against Johannesburg, Pakistan team captain Shoaib Malik won the toss and preferred the hosts to bat first, and Protez made 188 for 3 wickets in the over overs. Captain David Miller aggressively batting While scoring 65 runs in just 29 balls, his innings consisted of 5 highs and four charming squads, while Watsons scored 45 and Mulan 33 runs, Hendrix 28 runs, and Claus played 5 runs.

Pakistan’s wicked man Omad Waseem and Shahin Shah Afridi took one wicket, Usman Shinwari proved to be the most expensive bowler, who scored 63 runs in the 4 overs in Quota.
There has been a change in the national team, Shahin Shah Afridi has been included in the team of Fahim Ashraf, while David Miller is performing captain’s duties in the absence of the South African team’s permanent captain Faf Duplex. 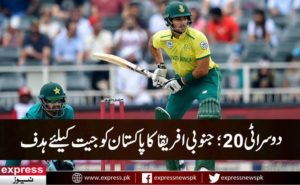