ICC chief executive Dave Richardson regarding Pak India dispute said that no match of the World Cup is being canceled nor there is no reason for the change in the World Cup schedule.

On the occasion of the 100-day countdown of World Cup, Dave Richardson said that we are looking at the situation with PCB and BCCI, but no match of the World Cup is being canceled nor the World Cup Schedule There is no reason for the change, all the competition will be scheduled.

World Cup tournament director Steve Ellerie says Pak India will be the most prominent match of this tournament, and it has a lot of enthusiasm for this competition, and thousands of people see it and its tickets. What
It is clear that there is no fear of Durrenderson and Alert in that India can cancel the match.

Sarfraz Ahmed’s final decision to lead the for World Cup, today the announcement 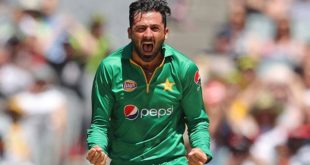